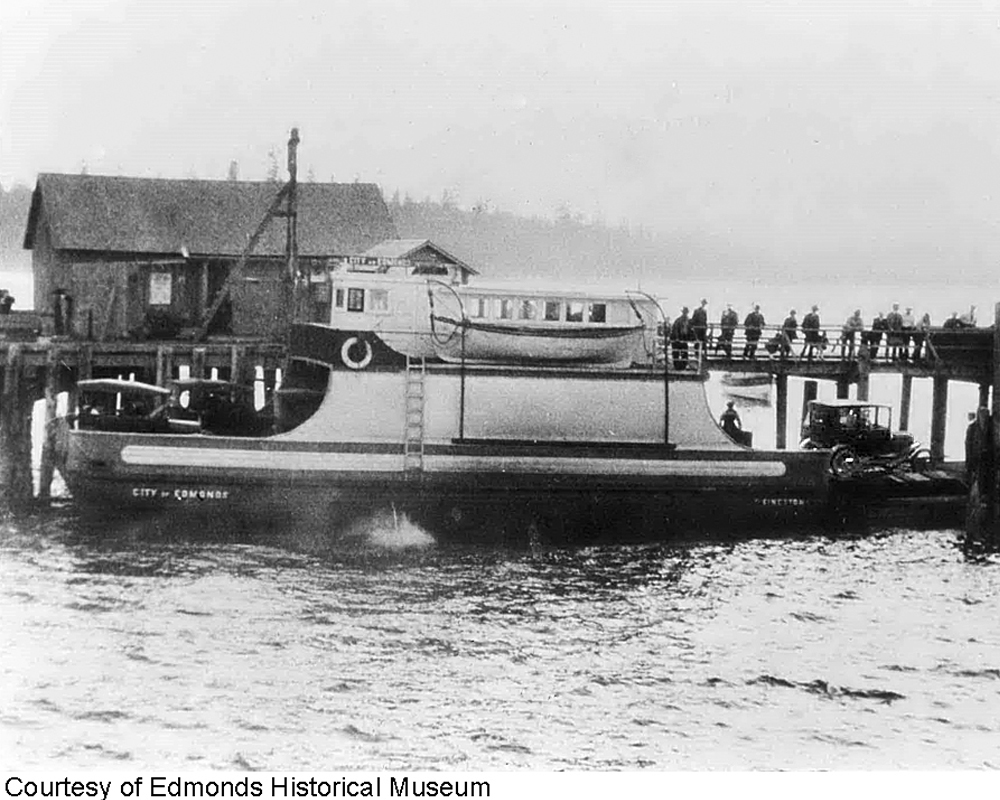 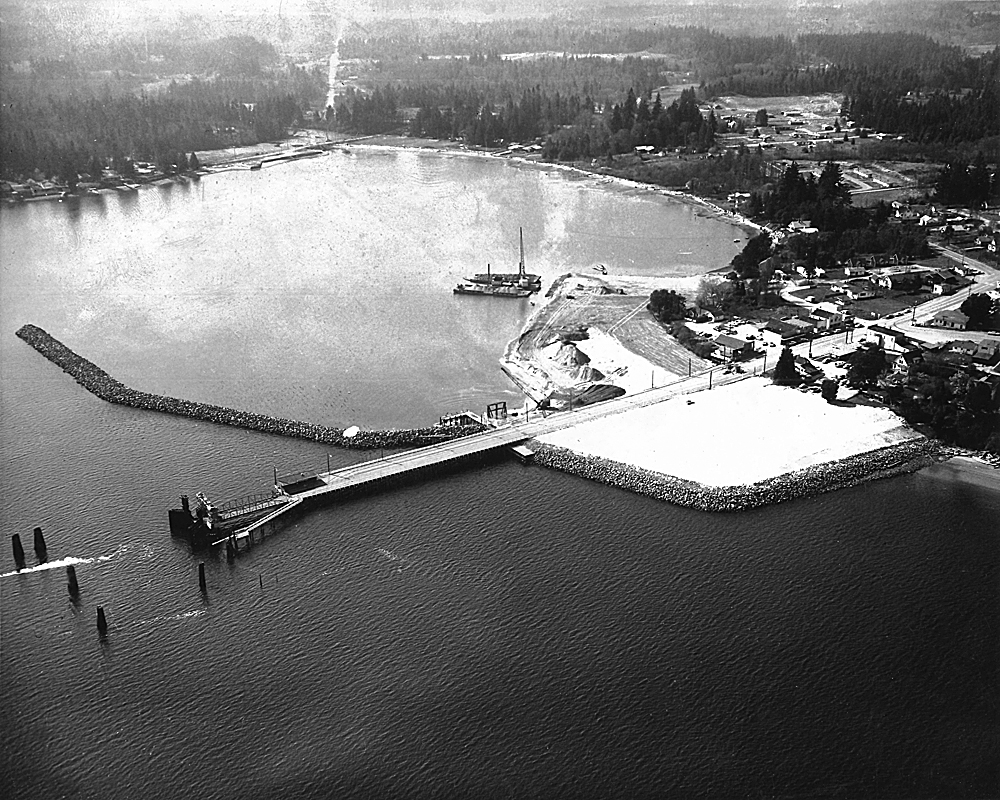 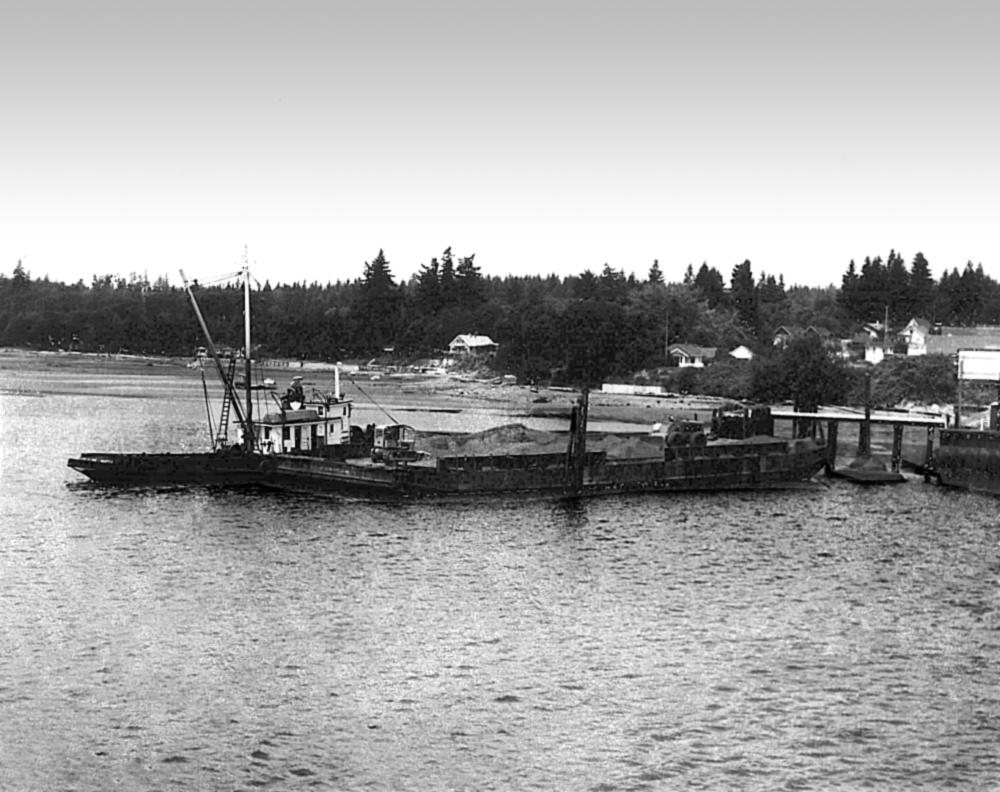 This file made possible by: Washington Public Ports Association

Voters on December 27, 1919, approve Port of Kingston’s plan to purchase and improve a wharf on Appletree Cove.

On December 27, 1919, voters approve the Port of Kingston’s plan to purchase a wharf on Appletree Cove and improve it for handling freight and passengers. Appletree Cove is on Puget Sound, on the south side of the Kitsap County town of Kingston. The Port of Kingston was formed in July 1919 to provide a public agency to maintain a landing dock for Mosquito Fleet steamers that provide transportation around Puget Sound. It needed voter approval of its comprehensive port development plan before beginning any improvement projects. In 1951 the state highway department will take over Puget Sound ferry operations and lease Port land for its terminal. The Port will then shift its efforts to developing a protected harbor and marina facilities. In 1966 the Army Corps of Engineers will construct a breakwater and basin and the Port will build a 274-slip marina, later expanded to include a small-boat facility and a guest dock. In 1997 the Port will purchase North Beach, just north of the ferry terminal and make it accessible for public use. In 2010 the Port will begin a twice-daily passenger ferry service between Kingston and downtown Seattle.

Logging and Leisure
Appletree Cove, on which Kingston, an unincorporated town in Kitsap County, sits, attracted its first white settlers in the 1880s and its first plat was filed in 1890. The Kingston Land and Improvement Company, formed by a group of Seattle investors, sought to establish the area as a “resort and hideaway for Seattle folk,” according to Kingston historian Harold F. Osborne (Little City by the Sea, 6).

Logging also drew people to the area. A logging railroad that brought logs in from the inland forests of the peninsula ended at a dock on the cove. Ships carried the logs to area sawmills. The Kingston Shingle Company employed a large number of area residents in the first two decades of the twentieth century.

Some rudimentary roads connected Kitsap Peninsula towns in the early twentieth century, but the Tacoma Narrows Bridge did not open until 1940 and passenger rail lines stopped at Tacoma and Seattle. This left peninsula residents mostly reliant on waterborne transportation.

Some residents took to the water in their own small boats, much as the Indians had for thousands of years. As towns grew and steamships became more common on Puget Sound, freight and passengers moved around more often on commercially operated steamers. Known collectively as the Mosquito Fleet, the various steamship companies created a network of routes that connected the many small towns dotting the coast of Puget Sound and Hood Canal with each other and with the larger cities, such as Seattle, Tacoma, and Olympia.

A Sheltered Harbor
Kingston, situated on one of the few sheltered harbors between Port Townsend and Seattle, served as a convenient stop for passenger and freight lines. The S.S. Dode ran between Seattle, Kingston, and towns on Hood Canal. The May B (later retrofitted and renamed May B II) connected Kingston with Ballard, a neighborhood in Seattle. The State of Washington, a sternwheeler, ran between Kingston, Port Gamble, and other Hood Canal towns.

Having a steamship dock helped Kingston grow into a freight and passenger hub. Farmers, loggers, and sawmill workers living in the surrounding countryside used the Kingston dock to load their farm produce onto steamers headed for markets and to take trips themselves. Likewise, people from larger towns came to Kingston for day trips or extended vacations. For holidays like the Fourth of July, Kingston became a popular destination for “excursionists.”

A Public Port
On July 29, 1919, community residents voted overwhelmingly (68 to 2) to create a port district to improve their dock facilities. The Port District Act of 1911 authorized the formation of port districts that could develop port facilities and fund the projects with property taxes, bond issues, operating income, and other prescribed means. The Port of Kingston’s district extends from Indianola in the south to Port Gamble in the north, covering the east half of the peninsula between those two towns.

The first three commissioners elected, Sam Arness (1880-1968), William H. Barber (1872-1947), and Warren J. Collins (b. ca. 1884), all lived in the Kingston area. Two of them, Arness and Collins, were farmers, and the third, Barber, farmed and had worked as a manager at the local shingle mill. Arness and Collins had lived in the area for decades. Barber seems to have been a more recent arrival.

The Port District Act required that the district’s voters approve a comprehensive plan for the port before beginning any projects. The plan prepared by the port commissioners called for the purchase and improvement of an existing wharf on the cove, “for the purpose of receiving freight and passengers and providing a landing place for boats and vessels of all kinds” (“Notice of Election”). It estimated the cost at $5,000, which would be financed with bonds issued by the Port.

Kingston’s Public Dock
The dock extended directly out from the main street through town, where the Washington State ferries dock now stands. Having a publicly owned dock allowed any steamship company to land at Kingston, increasing service and competition.

In the 1920s, as cars began to become more common on the peninsula, demand increased for car ferries. The 12-car City of Edmonds was added to the Edmonds-Kingston route in 1923. Fares were 25 cents each way for passengers and $1.50 for a car and driver. The crossing took 45 minutes. In 1924 the City of Kingston was added to the route. The following year the Ballard-Kingston route gained a car ferry.

The state took over the privately run ferries on Puget Sound in June 1951. Washington State Ferries rented the Port of Kingston’s dock and continued operation of the car ferry between Edmonds and Kingston. Passengers paid 50 cents each way and car-fare was $1.50. Washington State Ferries continues to lease the land from the Port of Kingston, providing a significant revenue source for the Port.

Building the Breakwater
Also in the 1950s, the Port began to seek Army Corps of Engineers assistance in developing the harbor. A report prepared in 1957 by Marmion D. Mills (1890-1964), a transit system consultant, proposed a breakwater for the cove, along with a marina for pleasure boats and commercial fishing vessels.

Mills made a two-part argument in support of developing the cove: “The needs of commercial fishermen for a protected harbor of refuge midway between Seattle and Port Townsend are more than matched by the needs for the great and growing fleet of pleasure boats of all sizes which make use of the waters of Puget Sound” (General Report). Although Puget Sound had a number of harbors, not many of them had been developed. At that time, according to Mills, no harbor between Shilshole Bay and Port Townsend offered refuge for small boats behind a breakwater.

The cove’s existing boat dock and one-vessel float did not serve even the 50 vessels that anchored there in an average week in 1957. Mills argued that with 50,000 pleasure boats and 2,200 commercial fishing boats registered on Puget Sound, there was tremendous potential for marina users. He correctly foresaw the increasing popularity of pleasure boating. In 2003 more than 168,000 boats were registered to Puget Sound area residents.

A breakwater would protect the cove from easterly gales, to which the natural harbor was vulnerable. The breakwater would also help maintain a dredged basin the Port needed in order to develop marina facilities on the cove’s north shore. Due to the costs associated with breakwater construction, the Port sought assistance from the Army Corps of Engineers.

The Corps of Engineers did not immediately agree to build the breakwater, which would extend across most of the cove’s mouth. They studied the project’s feasibility but did not produce a report recommending its construction until 1961. Congress passed an appropriation in 1962, with Washington senator Henry M. Jackson (1912-1983) a key supporter of the measure.

The Port agreed to provide land; operate a public landing; build bulkheads, piers, and floats; develop marina services; and build access roads. The commissioners also agreed to pay 31 percent of the cost, for a total of $435,000. The Army Corps of Engineers built the breakwater and dredged an entrance channel.

The dredge spoils were deposited to the north of the ferry terminal and along the shore of the marina, creating new land for a ferry holding area and for marina facilities. A riprap seawall (a wall of rock piled above the height of high tide) protects the fill from the tides.

Building the Marina
The onshore marina facilities were built on land given to the Port by the Puget Mill Company in 1930 and parcels obtained through eminent domain.

Hill & Ingram, a Seattle engineering firm, designed the Port’s marina. Their first plan was extensive, with a large building, a boardwalk along the shore, and the basin filled with boat slips. The final plan included a smaller building, no boardwalk, and fewer slips.  When the marina opened to the public in 1967 it offered space for 274 boats, a 2,800-square-foot building to house a boat and marine products supply store, an on-site shipwright, an electric boat hoist, fishing boat rentals, and a live bait pot.

The Port signed a twenty-year lease with Richard Hill to run the marina. In 1985 Hill retired and the Port has run the marina since then.

A reporter writing about the marina’s opening in the Seattle Post-Intelligencer remarked that there were “still some mutters of socialism” regarding publicly built and owned marinas. But, according to the article, “The simple fact is that private capital cannot afford the long-term investment involved in the construction of one of these salt water marinas.” The Shilshole Bay Marina, in operation since the mid-1950s, was “still in the red” (Browning).

In the past four decades the Port has added additional slips to the marina, including space for kayaks and other small boats. A guest dock has moorage and picnic space for boaters who stop in for a short time. In its 2006 master plan, the Port estimated that boaters who moored at the marina spent an average of $85 in Kingston per boat night, for a total economic input of $453,000.

Mike Wallace Park
On the land adjacent to the marina, the Port developed Mike Wallace Park, named for a beloved community figure. The park offers picnic and restroom facilities and hosts numerous public events, including a weekly farmers’ market from May to October.

The Port of Kingston added a 400-foot stretch of beach to its properties in 1997. North Beach, a sandy beach just north of the ferry holding area, is accessible to the public via a trail completed in 2008.

Ferry Into the Future
In February 2010, the Port of Kingston purchased Spirit, a 149-passenger ferry, and renamed it Spirit of Kingston. In fall 2010 the Port will start a passenger-only service between Kingston and downtown Seattle.

Although the modes of transportation have changed, the goals of the Port of Kingston have not. It continues to develop facilities on Appletree Cove that encourage economic development and draw visitors to Kingston and the surrounding region.